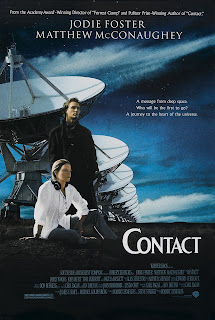 Contact brought some high minded science fiction to multiplexes back in 1997. Based on the Carl Sagan novel, the film had been in development for several years. Coming off the success of Forrest Gump, Robert Zemeckis took on the project. In its 20 year life span Contact has gone in and out of fashion. For starters, it's an easy film to pick apart piece by piece. Not everything works, and at 150 minutes there's an excess of plot. Few Hollywood films will even touch the science vs religion debate and Contact managed to pull it off with some nuance. The pro-science tone of the film, in spirit of Sagan's famous adage, "extraordinary claims, require extraordinary evidence" stands in contrast to the anti-science sentiments in the political sphere these days.

Jodie Foster stars as Ellie Arroway, an astronomer dedicated to the search for extraterrestrial life. Young Jena Malone plays Ellie as a child when she found her passion for astronomy as an escape to deal with the loss of her parents. Matthew McConaughey co-stars as an idealistic Christian who befriends Ellie, but will betray her at a key moment. Although the romance between them never quite comes off, their differing world views provide some thematic tension. McConaughey is believable as the spiritual guru and brings some energy to his scenes.

The film begins with a memorable opening shot that pans across the universe set to a lively soundscape of iconic sound bytes, it was the shot that envisioned to open Jodorowsky's Dune. Zemeckis maintained the pace well enough, especially in the many scenes with people in a room talking. Multiple screens are employed, a technique used in many of his movies. The sequence when the scientists discover the alien signal is also well shot, an impressive feat since everyone is looking at screens and yelling. Inserting CGI clips of President Bill Clinton are distracting and only served to date the movie. I speculate the purpose was to add a layer of reality as many media figures of the era also appear such as Larry King and and other figures from 90's era CNN.

After Ellie's team discovers a signal from the star Vega schematics are discovered to build a spaceship. Much of the drama in the second act revolves around who will be selected to go. Tom Skerrit plays Ellie's former mentor (Drumlin) and eventual nemesis, a stock character wrong about everything. Even though Drumlin's disparaged her work throughout the film, he gets selected because he's a believer. The public wants no atheists in space. Government officials played by James Woods and Rob Lowe who deny Ellie at every opportunity are also cardboard caricatures. When the first attempt goes awry, a reclusive billionaire played by John Hurt has a second ship prepared for Ellie. Her cosmic voyage at the end to be effective and even brave in the way it plays out, yet left many nonplussed.

On the science vs religion question, Contact aspires to split the difference. Both religion and science believe in powerful forces. One is based on faith and the other on evidence. Ellie's experience changes her, opening her to possibilities, but I would not agree she's been "saved" and will join the flock. The film ends with Ellie encouraging a group of children, directly addressing a young girl and encouraging her to be skeptical and to seek out her own truth. Foster's performance carries the film, we sense her isolation in a world where just about every man tells her she is wrong.

Carl Sagan passed away during the production of Contact, but his signature is all over the film. Sagan had a mystical way about him, he respected human spirituality as a moving expression or vessel of understanding the universe. He decried the increase in ignorance and pseudoscience in his book The Demon Haunted Earth. An apostle for science the world dearly misses, Contact is a good starting point for anyone interested to discover Sagan.