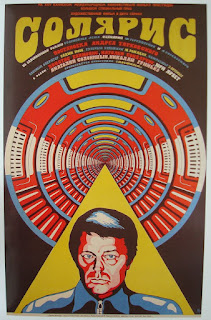 Russian filmmaker Andrei Tarktovsky's Solaris is a haunting and beautiful Sci-fi film full of mystery. Methodically paced, Solaris is the Yang to the Yin of Kubrick's 2001: A Space Odyssey. Western Sci-Fi movies have their own preoccupations, usually with technology and gadgets. Even though Solaris is mostly set in space, technology serves as no more than an appendage. Tarktovsky is more concerned with the human condition in the universe.

The story centers on a psychologist (Kris) who is sent to a space station to investigate a series of strange events. Crew members have disappeared without explanation. There may be ghosts aboard. When Kris arrives the survivors are secretive and distant. His deceased wife Khari also returns, but it's not necessarily her. An intelligence seems to be manipulating the environment for unexplained reasons.

Solaris is a film to be experienced. The first 40 minutes take place on a futuristic earth. Karl lives in an idyllic countryside with streams, blades of grass, in a blues and green landscape. He's being briefed about his mission through an archival film that looks like a staged documentary. Then a hypnotic sequence through a freeway into a city that goes on for about five minutes, transporting you to a different place.

Once on the space station the Solaris turns into a metaphysical mystery. Basic questions of life, death, and existence are all raised. What is the difference between dream and reality? What role does love play? Solaris defies interpretation, each viewing experience will conjure an array of emotions and responses.