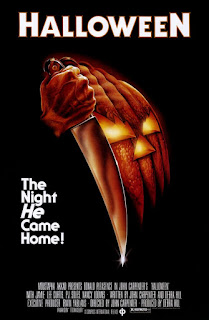 John Carpenter's Halloween is one of the greatest b-movies ever made, a whizzing 90 minutes of craftsmanship and schlock thrills. Carpenter's previous two films Dark Star and Assault on Precinct 13 were immediately hailed as cult classics. Both updated the b-movie, one set in space and the other at a L.A. police station. Halloween completes a trilogy of sorts, a minimal horror film set in middle America.

The opening POV tracking shot mimics the 1960 Michael Powell film Peeping Tom, forcing the audience into the murderer's perspective. After witnessing his older sister having sex, Michael Myers stabs her to death in a highly unsettling sequence. He spends the next 15 years in an asylum under the supervision of Dr. Loomis (Donald Pleasence).

Then we are introduced to Laurie (Jamie Lee Curtis), a shy and intelligent High School student starting her day. She gets teased by her friends for not going out with boys, she's content to make money from babysitting. As the day unfolds she senses Laurie thinks she is being followed. Her friends tease her about imagining men following her, yet for mysterious reasons Michael has fixated on Laurie

Carpenter's portrait of everyday life in the town tightens the tension, as laconic cops and store owners go about their business. They are not prepared for the threat of Michael. Laurie is one of the few awoke people in the town. Everyone from her parents, friends, even the kids are distracted by the routine of everyday life (and Halloween). Laurie's not the typical teenager, she's observant and ponders the world around her, essential survival skills for a slasher movie.

I like the interpretation of Michael being a total black void, a primal creation of unbridled rage. Nick Castle plays him with a child like disposition, yet monstrous in his actions. The ultimate boogeyman. There's enough left unexplained to allow a parlor game to on for hours as to the roots of Michael's rage: Freudian, Biological, Marxist, Feminist, or Theological.

Carpenter's music and direction allow for a natural flow. There's a focus to the story, the movie knows exactly when to end and begin. The 2018 big budget reboot looks better and has a sharper script, but it tries too hard to tell an epic story. Halloween 1978 keeps everything simple and razor sharp, a low budget triumph.
Posted by Eric Gilliland at 11:07 PM