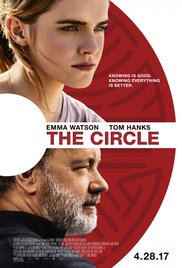 The Circle imagines a near future world with a catch all social network that dominates the media landscape.  Tom Hanks plays the creepy-nice CEO and comedian Patton Oswalt co-stars as his henchman who envisions a "post-privacy world" where people will live in total transparency, meaning anybody, anywhere can monitor each other at all times. A brave new world of newsfeeds and minute by minute status updates. Based on the Dave Eggers novel of the same title, I hate to pull out the "book was better" cliché, but in this case it's true.

Emma Watson stars as Mae, the company's latest recruit who rapidly climbs the ranks after leaving a boring temp job.  Mae's the ideal millennial: bright, compassionate, awesome social skills, tech savvy, and attractive.  The script, unlike the Dave Eggers novel, doesn't give Mae much to do.  She mostly interacts with people without establishing anything beyond a surface relationship -  no one is allowed to develop.

At its best The Circle satirizes the false optimism Ted Talks speeches and 21st century workplace culture.  The company, obviously inspired by Google and Facebook, looks Utopian on the surface. Most employees live on the "campus" where there are endless extracurricular activities and social events.  Their motto is "sharing is caring" which they repeat like a well behaved cult during the Steve Jobs-esque presentations.

The dark underside of social media is handled with sharper wit on TV shows like Black Mirror and Mr. Robot. The Circle works more as a sardonic companion film to the 2013 comedy The Internship with Owen Wilson and Vince Vaughn, an amusing commercial for the Google worldview.

The design of The Circle and the music are both well done, obviously inspired by David Fincher's 2010 film The Social Network.  But Fincher's movie kept the focus on human relationships and had a heart within its dark soul.The Circle is a jumble of half baked themes.

Hanks is never convincing as the nefarious CEO and Oswalt is given little to do.  The same goes for John Boyega as the mysterious genius who started the company, he only gets one worthwhile scene that's all exposition. Bill Paxton appears in one of his final roles as Mae's father. Karen Gillan stands out as Mae's co-worker/frenemy Annie.

So The Circle disappoints, which is a shame considering the timely subject matter and the strong source material (Eggers did get a script credit).  The ending feels especially rushed and ineffective. The final result is a milquetoast of a movie that's too timid to fully explore the questions it attempts to raise.