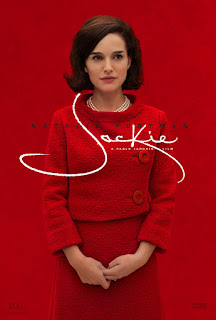 The 2016 biopic Jackie is about the aftermath of the JFK assassination. While countless movies have dealt with the events of November 22, 1963, none have been told from the point of the First Lady who witnessed the terror firsthand.  Natalie Portman literally becomes Jackie in a poignant performance.

Based on an interview Mrs. Kennedy gave to a Life Magazine journalist a week after the tragic events in Dallas when she sensed a plot to erase JFK's legacy from history. Lyndon Johnson believed a low key funeral would serve the country best and encouraged her to retreat into private life.

Out of respect for her husband, but also to let the her husband's enemies know the extent of what they did, Mrs. Kennedy insisted on a public funeral that would follow the path of President Lincoln's and also selected the President's resting place at Arlington National Cemetery.

Other performances stand out as well: Peter Sarsgaard as a stoic Robert Kennedy, Greta Gerwig as Jackie's assistant Nancy Tuckerman, and John Hurt in one of his final performances as a priest consoling Jackie.  Above all Portman portrays her character with intelligence, poise, and determination.

Jackie comes back again and again to the idea of Camelot, a brief period when America lived up to its ideals. Mythology of course, the early 1960s look grand in many ways but they were far from paradise.  Just ask Martin Luther King or Rachel Carson. Bobby wonders in a moment of doubt, "What did we really accomplish"? Jackie comments, "Isn't this what the Birchers wanted"?  The tension of memory and reality are in conflict, preventing the film from entering into hagiography territory.

Despite the mythmaking, the iconography of the Kennedy's continues to glisten.  The power of personality in history cannot be underestimated, and I don't mean hero worship, but leaders who brought out the best of its citizens: a call to service, not to ask what your country can do for you, but what you can do for your country.

Posted by Eric Gilliland at 2:58 PM