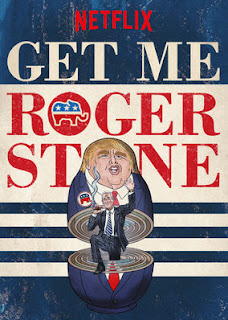 Get Me Roger Stone will be remembered as an educational artifact from the 2016 election, but beware, watching the film is akin to sticking your head inside the filthiest toilet you can imagine.

Who is Roger Stone?  A self described dandy who helps political candidates destroy their rivals, Stone started out as dirty trickster back in the Nixon days. According to William Safire's Political Dictionary the term "dirty tricks" was used in the 1960s to describe CIA Cold War operations, but took on a new meaning during the Watergate era.  Watergate involved all sorts of dirty tricks orchestrated by Nixon's reelection committee (CREEP), which ranged from Fraternity type pranks to shady slush funds, and eventually to illegal surveillance on political enemies.

Stone played a key role in many GOP campaigns to follow. In 2000 Stone organized a "riot" to stop the Bush v. Gore Florida recount.  The documentary suggests Stone is analogous to "The Cigarette Smoking Man" from the X-Files, a shadowy figure manipulating the course of history.  But he's more of a rake straight from a Dickens novel, a scandal monger who thrives on creating chaos.

The film follows Stone through his acrimonious relationship with the Trump campaign as an adviser in real time, he was hired, supposedly quit, then came back.  Stone had a long history with Trump, going back to 2000 when he engineered Trump's quashing of the Reform Party.  A media savant always good for a sound byte, Stone fed Trump many of his best attack lines and conspiracy theories.

At one point in the film Stone says he's merely playing a character. Is the whole persona an act? You be the judge.  When asked if he's afraid the movie will make everyone hate him he replies, "I revel in your hatred." Enter at your own risk.