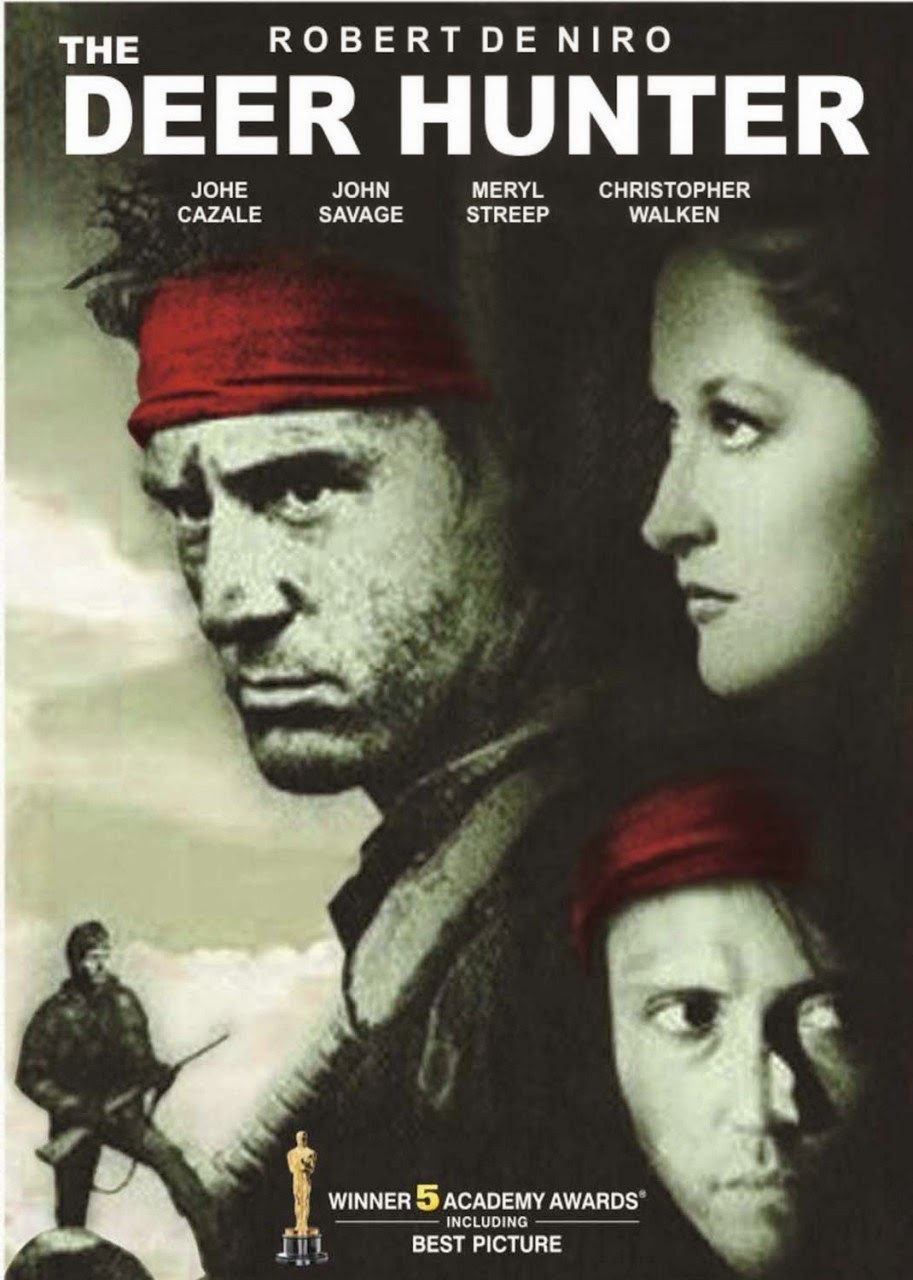 The Deer Hunter (dir. MIchael Cimino 1978) follows the lives of three men from a small Pennsylvania town before, during, and after the Vietnam War. They work the night shift at the local steel mill.  After work they drink beer, watch football, sometimes go deer hunting.  The film begins as one of them’s about to marry.  Released 36 years ago, The Deer Hunter remains one of the finest examples of American cinema of any era with its authentic locations, outstanding acting and direction, and Vilmos Zsigmond’s beautiful cinematography.

Each act centers around a ritual: a wedding, a deadly match of Russian Roulette, and a funeral.

Like The Godfather, The Deer Hunter opens with an extended wedding sequence, illustrating how the Russian/Eastern European population of Pennsylvania acknowledge their old world heritage, while at the same time embrace America in a cinematic portrait of assimilation. From the perspective of 2015, the sense of a lost America seems even more striking.  The iron and steel industry forged the nation's backbone which sustained communities for decades has virtually disappeared.

Foreshadowing comes in flourishes during the wedding.  Nick seems unsure about their decision enlist, while Michael seems ok with it.  During the the reception Michael and Nick encounter a soldier at the bar on leave from Vietnam.  The soldier sits there like a sphinx. Michael tries to prod him about Vietnam’s like, but he reacts with disgust to their enthusiasm. He has endured too much to be put into words, something both Michael and Nick will tragically realize in time.

The film then shifts to Vietnam where Michael, Nick, Steven are captives of the Vietcong.  In a cringe inducing sequence they are forced to play a deadly game of Russian Roulette.  The sequence remains difficult to endure and controversial for its portrayal of Asians.  Many question if American troops were ever put through such an ordeal by their captors (most likely not).  However, as a metaphor of war, the scene works.  The act of going to war is like a game of Russian Roulette.  You might survive or get killed.  There’s no way of knowing.  The scene assaults the audience with the stark reality of war. Cimino went for metaphor instead of realistic depictions.

The final act follows Michael when he returns home, where he learns Stephen lost both of his legs and Nick has gone MIA.  He begins a relationship with Nick’s fiancee Linda out of desperation.  While his friends want the good times to keep rolling like before, Michael realizes things will never be the same.  In a beautifully shot scene possibly modeled on The Wanderer Above the Sea painting by Caspar David Friedrich,  he comes upon a deer and aims to shoot, but pulls the gun away at the last moment, realizing he no longer wants to kill, choosing life over death.

Later, Michael returns to Vietnam to locate Nick.  He arrives in April 1975 as South Vietnam's about to fall.  He discovers Nick has gained a reputation in the Saigon underworld for playing Russian Roulette.  Michael confronts him, but Nick appears to have no memory of his former life.  Once again, Cimino asks the audience to suspend reality.  How could Nick have survived years of playing Russian Roulette?  How could Michael return to Saigon during such a chaotic time?  All I can say is sometimes the magic of cinema can even prevail over logic when the conditions are right.  Nick’s character arc plays like a Greek tragedy and symbolized what the war did to many American soldiers.

The final scene reunites all the characters after Nick’s funeral.  In their grief, they begin singing "God Bless America."  In the DVD commentary, Zsigmond recalls pleading with Cimeno to change the ending because it felt way too sentimental, almost laughable.  Cimeno replied, "the actors will make it work."  Cimino was right.  Roger Ebert said it best in his review,  "the lyrics of "God Bless America” have never seemed to me to contain such an infinity of possible meanings, some tragic, some unspeakably sad, some few still defiantly hopeful."

The entire cast had a magical chemistry.  John Cazale steals every scene he’s in as the loudmouth Stan.   Chuck Aspergen (Axel) a non actor who De Niro befriended while doing research in Pennsylvania, adds a presence.  Meryl Streep brought compassion and a quiet strength to the movie. De Niro carries the film in the lead role.  Both Walken and Savage exude a tragic lost innocence.

I would consider The Deer Hunter not so much a film about Vietnam, but a film about what Vietnam did to America.  Many films which came later dealt with the realities of the war such as Platoon or the PBS Series, Vietnam: A Television History.

The war's legacy continues to divide Americans.  For some, the era left them cynical and skeptical about America’s future, while others held on even tighter to the old fashioned patriotism.  The Reagan campaign of 1980 capitalized upon the need to reboot the old values and pop culture followed right along in the new zeitgeist.  Films in the 1980s restaged the Vietnam War with a far more satisfying outcome.  The Deer Hunter ages well because of it’s ambivalent politics and bold attempt to make sense of a tragedy.

The Deer Hunter wears its heart on its sleeve and that's ok. An epic story with evolving characters and small moments - a classic