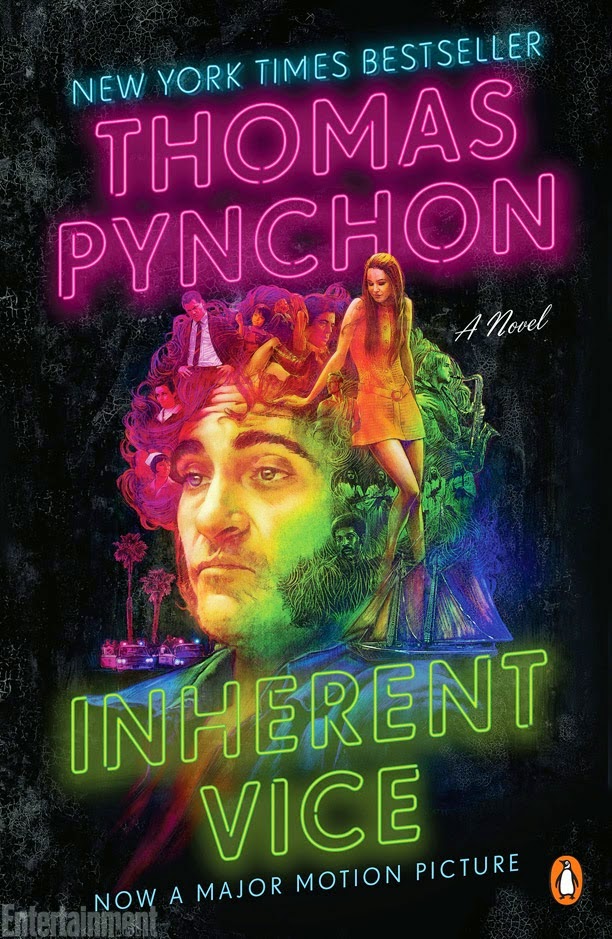 While The Big Lebowski will never lose it's cult status as an ode to slackerdom, I'll suggest Inherent Vice offers something more. Based on the 2009 Thomas Pynchon novel, Inherent Vice takes us back to Los Angeles in 1970.  With Nixon in the White House and the nation in paranoid shock after Manson family atrocities in California and the Kent St. killings in Ohio, Inherent Vice pinpoints a turning point in the culture.  Beneath the often hilarious slapstick humor, few modern actors do a pratfall better than Joaquin Phoenix, there's also a surreal melancholy in every scene.

Joaquin Phoenix plays Larry "Doc" Sportello, a private eye who enjoys getting high and clashing with the LA PD. The film begins with Doc alone at his apartment watching TV. His old girlfriend Shasta (Katherine Waterson) shows up, and like Mary Astor in The Maltese Falcon, leads Doc on a journey into, to quote Dr. Hunter S. Thompson, "the savage heart of the American dream."  Throughout the film, Doc uncovers conspiracies encased within conspiracies, a tripped out shaggy dog story.

Anderson's direction feels more restrained and less stylized than his previous films.  At 148 minutes, Inherent Vice moves along at a leisurely pace.  While each scene is connected to the grand narrative of the story, each one also works as a vignette, like songs on your favorite rock album.  I'd even compare the pacing to Tarantino's Jackie Brown (now a great companion piece to Once Upon A Time in Hollywood).

Film allusions aside, Inherent Vice exists in a unique cinematic universe of its own.  A sense of time and place comes across in every shot.  For example, the imagery amusingly reinforces the tension between the "straight world" and the counterculture. Doc understands the world makes no sense, or at least the version of the world the establishment wants to uphold. The sense of defiance and defeat is palpable.

I'll need to view Inherent Vice a few more times and I'm sure with each one my appreciation will grow.  While the plot's complicated and confusing at times, it's not incoherent. A dull moment never occurs.  We now have a great triple feature on the legacy of the 60s: Terry Gilliam's Fear and Loathing in Las Vegas, the Coen Brothers The Big Lebowski, and Paul Thomas Anderson's Inherent Vice.