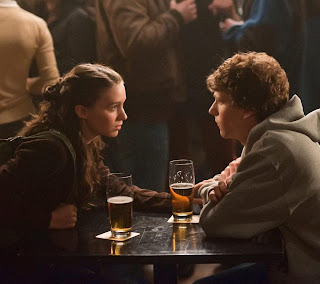 The Social Network opens with an intense conversation between two people.  There's no mediator- its just two people talking.  Mark Zuckerberg's (Jesse Eisenberg)  obsession with getting into the Porcellian Club at Harvard prevents him from connecting with his girlfriend Erica (Rooney Mara).  Angry after she breaks us with him, he writes an mean spirited blog entry to humiliate her.  And the rest is history . . .

A greenish, yellow hue with a dark background permeates almost every scene in the film.  A lurking darkness recalling to Gordon Willis's cinematography in Coppola's Godfather films.  At times, it seems Fincher is putting a subtle (or secondary) screen between the viewer and what's happening on the screen.  Are we witnessing history or fiction?  The strange color visuals hint at an artificiality of movies in contrast to the factual tone of the script.

A young cast carries the Social Network through its sophisticated script.  Perhaps no youth oriented film youth film has had better casting since American Graffiti.  Zuckerberg as played by Jesse Eisenberg is lonely, childish, and cunning.  Has Eisenberg made a bad film?  His work in The Squid and the Whale, Zombieland, and Adventureland make him one of the most promising actors of his generation.  Rooney Mara only appears in a few scenes, but manages to convey a compassionate beauty and a righteous anger.  No one doubted Mara would make a fierce Lisbeth Salamander in The Girl With the Dragon Tattoo. Justin Timberlake  as Napster founder Sean Smith steals the second half of the film. And the film has two traditional villains in the Winklevoss twins (who in a great moment compare themselves to Cobra Kai dudes in the Karate Kid).

Zuckerberg is alone at the end much like Orson Welles in Citizen Kane.  He stares sadly into his own creation as "Baby You're Rich Man" plays.  Also, like Charles Foster Kane or Orson Welles for that matter, Zuckerberg,  moved media into a new age.  Personally, I'm not a big fan of facebook.  But does anyone really love facebook?  The Social Network is American movie making at its best with its uncertainty towards class, technology, ambition, and character.

Posted by Eric Gilliland at 8:15 PM