My Own Love Song is full of pleasant surprises.  Rene Zellweger delivers one of her best performances as a woman coming to terms with the past.  Her co-star, the always brilliant Forrest Whitaker, matches her at every step.  The soundtrack, written by no other than Bob Dylan, fits in perfectly with film's wistful, but hopeful mood.  My Own Love Song brings to mind Faulkner, Guthrie, and the mythology of the USA.  French filmmaker Olivier Dahan has crafted his own love song to America.

Jane Wyatt's (Zellweger) once promising singing career came to a halt after injuries from a car accident confined her to a wheelchair.  Several years after the accident she lives alone and her only friend is a local named Joey (Forrest Whitaker) who is also scarred by a past trauma.  Both performances evoke sympathy and resilience   Their unlikely friendship also recalls 1970s movies with people from different ages, genders, and class came together.  Joey convinces her accompany him to New Orleans to meet a man who claims be in communication with angels. Along the way they meet Nora, who's husband has disappeared, and Caldwell (Nick Nolte) a former musician struggling with post-traumatic stress after Hurricane Katrina. 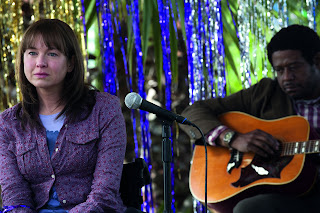 Music plays a central role in the film.  Like Robert Altman's Nashville, Dahan includes scenes where the characters perform songs.  In those moments they achieve a true transcendence adding so much to their characters and the story.  Bob Dylan's soundtrack, mostly from his his 2009 album Together Through Life, a collection of tunes evoking loss and rebirth, setting the right tone for the film.

The mythos of American music also has a unique spirituality. A spirituality beaming from the earth that goes right into the soul.  Even in 21st century America mystery lurks everywhere in a land with a rich, mostly unknown history.   Few filmmakers tap into the mystical aspect of America - tending to prefer critiques.

Unfortunately (and ironically), My Own Love Song never saw a general release in America. It is now available on Netflix.  After Hurricane Katrina, America never got a Grapes of Wrath or even a film to put the tragedy into a historical context (Spike Lee's When the Levees Broke is an exception) and its own small way My Own Love Song is a reckoning with American tragedy - and hope.

Posted by Eric Gilliland at 7:33 PM