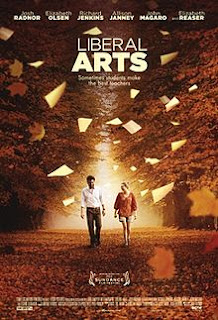 Any young person who decides to major in the humanities, especially in this economy, does so at their own peril.  Or that's what society says.  Dedicating one's time these days to a "life of the mind" or towards creative endeavors faces the prospect of being told "to live in the real world" or "just be a teacher" (not knocking teaching in anyway here).  Meanwhile, book culture has underwent its share of knocks in recent years.  Book store chains are closing and placing all their hopes in electronic reading gadgets.  Alternative reading cultures have merged online with sites like goodreads and Amazon.  Readers are out there.  We're not in Fahrenheit 451 territory yet.

Starring Josh Radner (who also wrote and directed) as a hyper bookworm living in New York City where he works as a college admissions counselor.  The film opens with him giving lame pitch lines to prospective students. After breaking up with his girlfriend, he is invited back to attend an old professor's retirement party in Ohio (filmed at Kenyon College).  Jesse is the type of person who wishes college never ended with the all night chats on Delillo and Roth (although we never learn about his ambitions in college). While visiting his former professor Jesse meets a kindred spirit in Zibby (Elizabeth Olson) a drama student wise beyond her years.

Liberal Arts is not necessarily a romantic comedy, but a film about maturity.  So, it asks some mature questions:  What does it mean to be an adult?  Why is there so much anxiety about the passing of time?  All the characters in the film are very mature - maybe the most mature film I've seen in some time.  Thankfully, the film avoids an onslaught of quirky characters, but actual adults who are engaging with the world and doing the best they can.

Jesse is a bit flaky at times, but never annoying.  When an old professor accuses him of acting like an "effete, man-boy" he decides to make a change.  He grows up.

Of course, the title "Liberal Arts" screams independent film.  The editing is sharp and all the performances ring true.  And as a liberal arts guy myself, the film has an encouraging message.  One can still build a life and stay true to their passions and still live as a functional person in the real world.  Someday, anyway.