Inspired by the Pure Cinema Podcast, I decided to do a horror movie all night marathon. The goal is to watch six movies from 7pm-7am, from dusk till dawn. As a rule, classic trailers are interspersed between the features. 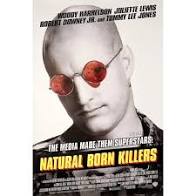 7pm - Natural Born Killers (1994, Oliver Stone) Technically not a horror film if one is strict about genre definitions, but Natural Born Killers is very much about American horror. From a Quentin Tarantino story, which he sold for $10,000, leading to an acrimonious feud between Mr. Stone and Tarantino. Still a divisive film with its sensationalistic depiction of violence, the story follows couple Mickey (Woody Harrelson) and Mallory (Juliette Lewis) who go on a killing spree after they tie the knot, are subsequently captured, and sent to prison where they foment a bloody riot. Edited in a hyperkinetic style that recalls 60s psychedelia, but also mimicking MTV videos that were airing 24 hours a day in the 1990s, Stone never gives the audience a chance to breathe. Much of the controversy revolves around whether Stone was scolding Americans for their love of media hyped crime stories or, even worse, inviting audiences to revel in the chaos. As Stone states in the blu-ray introduction, effective satire must shock audiences. As the Mickey and Mallory unleash madness across the American West they become media heroes, a Bonnie and Clyde for the MTV generation. In flashbacks to their childhoods we see a history of neglect and abuse, especially in Mallory's awful household that's set to a sitcom laugh track. Rodney Dangerfield plays her lecherous father in one of the most disturbing performances you'll ever see in any movie. In 2020 the film has prophetic overtones. A killing spree has the look of a mass shooting, now a staple of life of America. True Crime podcasts and TV shows are bigger and more mainstream than ever before. The tabloid culture of the 1990s elected a tabloid president in 2016 (got 60 million votes) who proclaimed he could start shooting random people from a skyscraper and not lose any support. So yes, the crude, violent, and hypocritical America trumpeting family values while dooming their children's future, yeah, felt relevant this time around. Moving on! 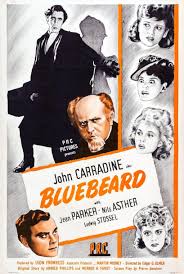 9pm - Bluebeard (1944, Edgar G. Ulmar) I watched this one on a poor quality DVD which may the only appropriate way to experience it. After the onslaught of Natural Born Killers, Bluebeard plays as some garbled fever dream from the Victorian era about a psycho killer terrorizing Paris known as Bluebeard. John Carradine's (who also played Dracula) plays a dashing puppeteer and painter wooing Parisian women and then murdering them. Inspector Lefevre suspects Barrymore is the killer and sends in a beautiful undercover agent to reveal him. Directed by the legendary Edgar G. Ulmar, best known for his low budget masterpieces of expressionism., Bluebeard marked a surreal detour for the evening.

11pm - The Believers (1987, John Schlesinger) Now a change of pace: supernatural evil intruding upon the modern world. As a thriller The Believers is consistently effective, thrilling and often creepy on a subterranean level. The first five minutes are about as shocking as it gets, capturing how the routine of everyday life can quickly devolve into tragedy. Martin Sheen stars as a recently widowed psychologist who moves to New York City with his young son. Working with the Police Department, Sheen is helping them investigate a rash of child murders that appear to be ritual sacrifice tied to the Santeria community. Further investigation reveals an even deeper conspiracy involving Manhattan's elite crowd. These plot points do bring up some of the strengths and weaknesses of the film. On the first point, the plot could serve as a conspiracy theory fuel for audiences susceptible to stories involving elites and the occult (the 1980s was the decade of Satanic Panic, a dry run for today's even grander scale mass delusions). The second point is the xenophobia, any religion outside of mainline Christianity in American movies rarely gets handled with any finesse. While The Believers clumsily tries to address the issue, one character points out being a non-traditional Christian is an easy way for white Americans to marginalize a community, that particular theme is paid mere lip service (Wolfen handles it in a more interesting way). Stoking up fear over Caribbean religions has long been a cottage industry in Hollywood from the very beginning, White Zombie from 1932 being an early example. Even Sheen, a liberally minded protagonist, is revealed to have xenophobic attitudes. Christianity is not used to symbolize Western morality here, but modernity itself - another trope in supernatural thrillers. What makes The Believers effective is its sense of the uncanny, Schlesinger's focus on mundane details of everyday life create an ominous subtext carried through to the final shot. 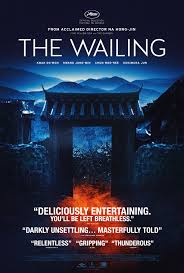 Next came The Wailing, a 150 minute horror epic from South Korea. A mysterious visitor arrives at a village and a terrifying infection begins to spread among the residents. Kwak Do-won stars as a cop investigating a string of gruesome murders possibly linked to the malady ravaging the village. A shaman is brought into town to chase the away the evil spirits, leading to one hell of an exorcism sequence. Then you realize there's still an hour to go! Tropes from so many other genres are employed from ranging from animal to zombie attacks to body horror, but The Wailing is also character driven, including wry humor and heartbreaking drama. The first hour is mostly set up and the horror slowly creeps in until the very end when you are literally inside a nightmare. Like The Believers, dueling world views are in conflict. The Catholic Church plays a peripheral (and ineffectual) role in the story. Family ties and the links people will go to protect their loved ones is another major theme. But like any masterwork of supernatural horror, it's the inexplicable aspect of the story that truly haunts the imagination. Sometimes awful things happen with no explanation, mocking our human need for reason behind senseless tragedies. The acting and cinematography are amazing.

Another often told tale about an ancient evil intruding upon the world of science and reason. The many incarnations of Dracula up to this point had taken elements from the 1897 Bram Stoker novel, Coppola's adaptation follows the novel fairly close in structure and theme. My own memories of reading the novel are the creepy early chapters in Transylvania, but the second half became a slog (lots of blood transfusions). The film also follows that arc. The saving grace is the stunning production design by Coppola's team, pretty much every shot could be a still painting. The focus is on the sensual side of the story, staying within the Gothic tradition. Winona Ryder is strong as the lead Mina Harker who must defeat Dracula. Gary Oldman is no Bela Lugosi and his makeup is ridiculous, somewhere between Emperor Palpatine and Mr. Burns. Anthony Hopkins plays a shifty Dr. Van Helsing and a young Keanu Reeves plays the meek Jonathan Harker. A tad overlong, but a triumph of cinematic vision and production design. 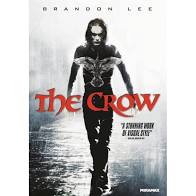 Closing out the night with The Crow felt right. A classic and influential film combining a comic book sensibility with Gothic themes, gritty action, and grunge music. The story is straight forward, a man returns from the dead to avenge those who murdered him and his girlfriend. Brandon Lee tragically died on set after being shot by what was supposed to be a fake bullet adds a layer of tragedy to the film. Lee shows potential here, if he had lived The Crow could've launched an amazing career. The set pieces are imaginative, mostly shot at night evoking a noir atmosphere. A superb supporting class including Ernie Hudson and Michael Wincott. A perfect movie for Halloween with its mix of darkness and light, an urban futuristic backdrop synthesizing Blade Runner with Escape From New York.

Posted by Eric Gilliland at 1:42 PM

Email ThisBlogThis!Share to TwitterShare to FacebookShare to Pinterest
Labels: 2020, All Night Movies