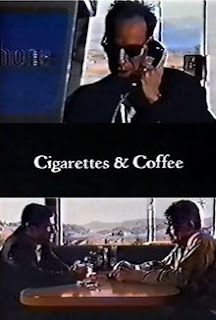 Cigarettes & Coffee was an early short film by Paul Thomas Anderson made in 1993, a few years before his major breakout Boogie Nights. The film plays like a rough draft of Anderson's debut feature Hard Eight (AKA Sydney) which dealt with a mentor relationship between a wizened gambler and an aimless young man. Phillip Baker Hall virtually plays the same role here. It begins with Hall instructing a man on the ritual of lighting a cigarette and having a cup of coffee. The younger man played by Kirk Baltz (he famously played the cop tormented by Mr. Blonde in Reservoir Dogs) is about to reveal a secret. Then the camera shifts to a man and woman a couple of booths down, we learn they're on their honeymoon and are having an intense argument over a craps game. Meanwhile the camera follows an ominous Miguel Ferrer taking phone calls outside which may be connected to the other characters.

A simmering mood piece for 23 minutes, the diner setting being serves as a place for high drama also used memorably in Pulp Fiction and Heat. The title itself is a direct reference to the Jim Jarmusch film Coffee & Cigarettes, a series of wry vignettes. Anderson uses the format to display understated drama, mere glimpses of relationships with long histories. Imagery focuses on the minor details: money, coffee cups, two shots, and close ups. The tension between the laid back atmosphere and ominous goings in the background create an effective tension. Hard Eight would explore the mentor relationship further, only it plays out with a crime narrative in the background.
Posted by Eric Gilliland at 3:41 PM