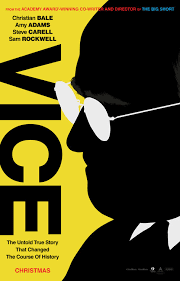 With Vice, a worthy follow to his 2015 film on the 2008 financial crisis The Big Short, Adam McKay continues to inject some life into depicting modern history on film. Here the subject is former Vice President Dick Cheney, a man considered the architect of the Iraq War, a lethal power player in Washington politics, and a symbol of modern greed (although he has many competitors for that label.) Going back to the Ford administration, Cheney was known as the biggest SOB in the room who won every bureaucratic battle. It was an image he cultivated. There's a story from Peter Baker's account of the Bush years (Days of Fire) that Cheney almost posed next to a Darth Vader helmet, but was talked out of by his aides, I wish he had.

McKay's approach to Cheney's life takes up where Oliver Stone left off with his 1995 film Nixon, mimics Michael Moore style editing, and applies his SNL style of humor. Christian Bale was better than I expected and he does look like Cheney. It's a subtle performance and probably a tough one to pull off, both satiric and serious. Marketed as comedic romp in the trailers, and while it is that, Vice is not a film to revisit for the laughs.

The human side of Cheney comes through in his family relationships. A hard drinking laborer as a young man in Wyoming, he improved himself for his wife Lynne (Adams). When his daughter Mary came out as gay, he accepted it with love and support. There are scenes of Cheney patiently teaching his daughters how to fish. Warm and fuzzy stuff. Many have pointed out that even the vilest of men of history have treated their immediate families with compassion, but what about those outside the primal unit?

Cheney began his Washington career as Donald Rumsfeld's (Carrel) protege during the Nixon administration. Carrel is more clownish than serious. As chronicled in the Barry Werth book 31 Days, the two of them made an epic power grab after the resignation of Nixon. Both became millionaires in the private sector and remained major players in GOP politics. Vice suggests Cheney aspired to be President, but found an even greater opportunity as George W. Bush's VP. As played by Rockwell, GW is well meaning, but uneasy with all the responsibility.

Vice goes to great lengths to explain the Unitary Executive Theory, the idea that the President should have unlimited power when it comes to national security, a response to the War Powers Act of 1973 that put a check on executive authority. Cheney saw an opening, a Vice President could act without oversight, so he set up his own renegade department within the executive branch. A team of conservative legal scholars provided the justification.

Vice goes to great lengths to explain the Unitary Executive Theory, the idea that the President should have unlimited power when it comes to national security, a response to the War Powers Act of 1973 that put a check on executive authority. Cheney saw an opening, a Vice President could act without oversight, so he set up his own renegade department within the executive branch. A team of conservative legal scholars provided the justification.

Vice also recreates the hours in the White House bunker after the 9/11 attacks with Cheney taking control of the government. As the international climate changed overnight, Cheney saw a means to assert American power in ways never dreamed of before by the most militant of hawks. As Cheney and his team planned the Iraq War, Bush went along with it reluctantly (as the film portrays it). They strong armed Secretary of State Colin Powell (Perry) to present misleading evidence at the United Nations connecting Iraq with Al Qaeda terrorists, and in the process, not apparent in the exuberant days after the fall of Baghdad, plunged Iraq and the region into chaos, costing hundreds of thousands of lives and billions of dollars.

We now live in the world fomented by Bush and Cheney. Was it all a cash grab for American energy companies? Getting those non-existent WMD's? A half-baked geopolitical gambit? To ignite a democratic revolution? The post 9/11 world of enhanced interrogations and 24/7 surveillance certainly doesn't look more democratic. We get Cheney's own justification at the end, a variation of the Nicholson "you need me on that wall" speech from A Few Good Men.

Apparently, both sides of the political divide are irked with Vice. The right will dismiss it as Hollywood propaganda, while many critics on the left feel McKay did not go far enough in condemning Cheney. I did not walk away with that impression. Here we get history as farce, but a farce with consequences. The film leaves you thinking about how the decisions of the past shaped the reality of today.
Posted by Eric Gilliland at 1:41 PM