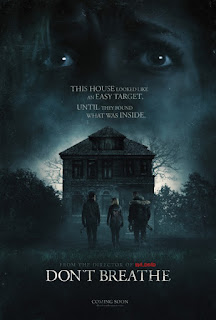 Exuberant reviews aside, Don't Breathe is an exceptional horror film with some pointed social commentary.  Set in economically depressed Detroit, the film follows three teenage thieves who survive by robbing the rich.  These working class kids make for a somewhat unorthodox team: the hothead "Money", safe cracker Rocky, and the intelligent Alex.

After discovering a news story about an Iraq war vet (Stephen Lang) who won a huge legal settlement in a wrongful death suit the trio decide to rob him and get out of town.

What the band of thieves fail to consider is the man they are ripping off is a demented psychopath. So what they thought would be an easy job turns into a nightmare.  It's a reverse of Audrey Hepburn in Wait Until Dark, the blind "victim" turns the table on the thieves.

When the horror begins the movie turns into a cat and mouse game, and a violent one at that.  Of course the house is full of crawl spaces, spacious basements, and lots of glass. Stephen Lang steals the film as "The Blind Man" in a menacing performance, a seemingly indestructible force of nature reminiscent of the original Michael Myers from Halloween.

Don't Breathe supposes a town of hungry thieves and psychotic war vets breeds horror upon horror.  With everyone disenfranchised and democratic institutions losing their relevance - only the brutal and amoral will survive. This ain't the Ocean's Eleven ending with "Clair de Lune" playing in the background.