Planet of the Apes: Franchise Review

From 1968-1973 20th Century Fox released five Planet of the Apes movies, all telling a continuous story spanning centuries.  The premise, from Pierre Boulle's novel. imagines an Earth where Apes have become the dominant species and and humans are reduced to servile roles.  The blend of social commentary, stirring action, time travel and other Sci-Fi elements made Planet of the Apes a groundbreaking franchise, a precursor to Star Wars and Star Trek.  Recently, I watched the originals, and while they are obviously dated and uneven, they remain relevant and well worth revisiting. 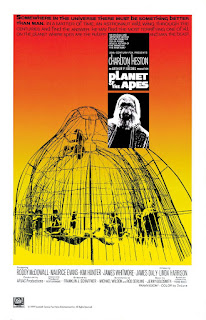 The saga opens with a crew of astronauts crash landing on a supposedly desolate planet over 2000 years into the future.  Led by the cynical Taylor (Charlton Heston) they quickly discover apes are the dominant species and humans can neither talk nor do any thinking for themselves.  Taylor is taken in by two kindly chimps who realize he is a gifted human.  While some of Heston's deliveries are comical, "It's a Madhouse", a Madhouse" his casting proved smart and subversive.  Known for playing heroic leaders such as Moses and Ben-Hur, and other staunch defenders of Western civilization against non-white savages, Heston found his world upside down because he is the one being hunted and exploited.  Ironically, Taylor is a misanthrope who finds himself in the position of defending humanity.  John Chambers innovative Ape makeup rightfully earned a special Oscar.  Jerry Goldsmith's haunting score plays well alongside the stunning cinematography of Leon Shamroy. Great Sci-Fi always works as allegory, and Planet of the Apes doesn't shy away on issues of cultural superiority and historical injustice.  And of course the ending remains one of the great shockers in movie history with the indelible image of fallen man before the Statue of Liberty, iconic before the word became fashionable. 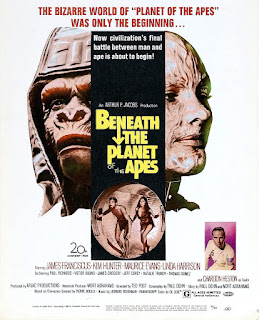 
**
According to Eric Greene's book on the series, Planet of the Apes as American Myth, the early scripts for the sequel were much better than the final product.  Heston, reluctant to star in a sequel, agreed to only appear in a few scenes.  So we get a Heston lookalike James Franciscus as a replacement who is on a rescue mission to find Taylor and his crew. Beneath the Planet of the Apes lacks the focus of the original.  Human "mutants" are introduced as villains who worship a nuclear bomb.  Meanwhile a militaristic faction of Apes are determined to wage a war of extermination on the mutants.  Action scenes are shoddy with rear projection effects.  Nevertheless the final set piece in a mutant temple is strange and eerie.  Beneath ends on a nihilistic note with Taylor setting off a doomsday weapon, the logic being there is no hope so we might as well blow everything up. An odd cocktail of a sequel that works in spite of itself. 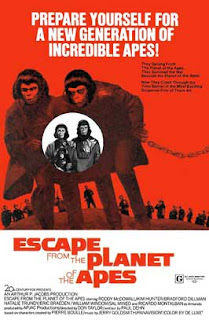 The third chapter traveled back to the present to provide the "backstory"of how apes took over the planet.  When Cornelius and Zira, the chimps who befriended Taylor, used his spaceship to travel back in time, they are at first greeted with kindness by the people of earth.  The first half of the film is rather light humored and satirical as Cornelius and Zira become media sensations.  In time, as they do in Apes movies, things take a grim turn.  When government officials learn apes will one day conquer they demonize Cornelius and Zira.  The production overcame budget constraints by emphasizing character development and ideas. 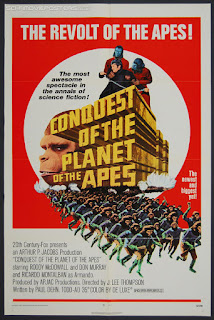 By far the darkest film in the series and the most overt in its political commentary, Conquest of the Planet of the Apes bravely examined issues of rage and historical injustice. Set 20 years later, Caesar, the son of Cornelius and Zira, realizes he is destined to lead an ape revolution. Humans keep apes in servile roles, obviously symbols of slavery and racism.  When Caesar's caretaker Armando (Ricardo Montalban) is murdered by the secret police (America is a quasi-Fascist state), he learns firsthand how the government brutalizes apes.  Caesar leads a revolt filmed in direct reference to the 1965 Watts Riots in Los Angeles. The movie made a daring move by asking the audience to sympathize with rioters, their rage is completely understandable.  The questions raised in Conquest remain crucial for today's climate:  When times of change come, will people handle it with anger or acceptance? 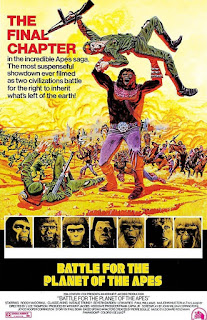 The final chapter of the Apes film cycle attempted to bring the story full circle.  Set sometime after the Apes have established their dominance of the Earth after a nuclear war destroyed human civilization and the world has reverted to a primitive/non-technological existence. Caesar, still the leader of the apes, wants to live in coexistence with humans and move towards a brighter future to avoid generations of war and eventual apocalypse.  For the first and third acts there's thoughtful philosophical meditations on tolerance and how to live together in peace.  Unfortunately the middle of the movie is muddled with bloated action sequences involving the mutants and the militaristic gorillas.  Something in the script didn't quite gel. Nevertheless the last 10 minutes are moving and include a poignant final shot.


Watching these five films in order,  the sum is worth more than the parts.  They speak to the time they were made and still resonate today.  Roddy McDowell appears in four of the five and really is the heart and soul of these movies: always the voice of reason and tolerance.  The first entry works as a great stand alone film if you don't want to get into the further installments.  But if you do watch all five of them, be ready for some exciting and even cerebral entertainment at times.