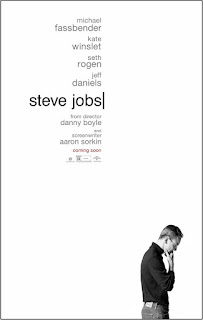 Despite the number of cliches associated with the bio film, Hollywood keeps making them. 21st century biographical movies usually begin at a pivotal moment in the subject's life and then proceeds on with flashbacks and flash forwards hinging on that one moment e.g. Beyond the Sea, Step on Up, Walk the Line.

Others focus on a portion of the subject's life such as Lincoln, Frost/Nixon, The End of the Tour.  I like the snapshot approach.  Many of the cliches are avoided: aging makeup, death scenes, and soundtrack cues to mark the passage of time.  The only drawback to the "snapshot" approach is the movie can seem too much like a stage play.

Steve Jobs synthesizes these two approaches: we get three moments in the life of Jobs with the occasional flashback included for good measure. Sorkin's 1930s screwball comedy writing style and Boyle's exuberant visuals make for a fascinating, but not an altogether successful combination. A style over substance issue.

Michael Fassbender delivers a commanding performance as Jobs.  All the usual ticks associated with Jobs are present: tyrannical towards his subordinates, fraught relationship with daughter, the artistic visionary in conflict with conservative corporate types (personified in Jeff Daniels as the Apple CEO who fired Jobs).  Kate Winslet got the thankless task of playing his put upon assistant.  Seth Rogen as Apple co-founder Steve Wozniak is the jilted former sidekick.

If Steve Jobs proves anything it is our persistent obsession with the lone genius illuminating the future. We see it in The Imitation Game with Benedict Cumberbatch and to satiric effect with Oscar Isaac in Ex Machina. Maybe we need a movie about the people at Apple who created the technology by working together?

So the triple threat of Fassbender, Boyle, and Sorkin are very much worth seeing, despite the awkward attempt to transcend genre.