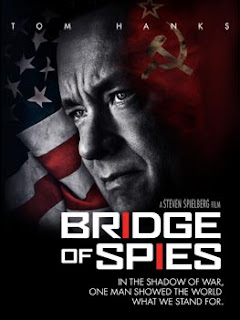 In Bridge of Spies, the fourth collaboration between Steven Spielberg and Tom Hanks, they document a pivotal moment during the Cold War. Promoted as an espionage film, I would classify it more as a procedural along the lines of Lincoln.  Almost as if Daniel Day Lewis's Lincoln rematerialized as Tom Hanks.  After making Saving Private Ryan and Munich, two films about violent conflict and its consequences, Spielberg's now telling stories about conflict resolution in a political age where fiery rhetoric is the norm.

Tom Hanks is James B. Donovan, a straight laced lawyer assigned the difficult task of defending Rudolf Abel, an alleged Soviet spy. As America is transitioning from the Eisenhower to the Kennedy era, Cold War tension continues to intensify. Reluctant to take the job, he nevertheless defends Abel to his fullest ability.


Then the plot thickens.  In 1960 American spy planes began flying missions over the U.S.S.R. to photograph nuclear missile sites. On May 1, 1960 Francis Gary Powers was shot down and captured by Soviet authorities and paraded on television to reveal the Eisenhower administration's cover up.  The incident agitated an already tense international situation.


Donovan is approached by the C.I.A. to negotiate a prisoner exchange with the Soviets: Abel for Powers.  Bridge of Spies really picks up when Donovan goes to Berlin and find himself ensnared in Cold War intrigue. With Soviets building a wall in East Berlin the Cold War is no longer an abstraction for Donovan.  These sequences recall Saving Private Ryan because the aftermath of the Second World War is on full display.  The wintry Berlin adds an authentic atmosphere.


In recent years I've sense an audience weariness with Tom Hanks always playing the generic liberal hero. I'll admit his character is too good to be true, Hanks playing Hanks.  But my attitude changed as the film unfolded.  In one scene he's approached by a CIA agent who tries to intimidate him.  Donovan replies with a thoughtful speech on American identity, the idea being a belief in the constitution is the one thing above all else that unites Americans, not ethnicity or heritage.  That's a worthy notion.

Engaging with people who have different ideas is another key theme. Donovan's a tough negotiator who manages find common ground with the Soviets and the East Germans. Talking things out may lack drama, but it beats war.


Written by no less than Joel and Ethan Coen, along with Matt Charman, their dialogue keeps the movie humming along.  Janusz Kaminski, Spielberg's cinematographer since Schindler's List, wonderfully captures the panorama and grittiness of 1960s Berlin. Spielberg, now in the latter stages of his career, continues to use cinema as an arena to examine history and do what he does best - tell stories.
Posted by Eric Gilliland at 4:35 PM