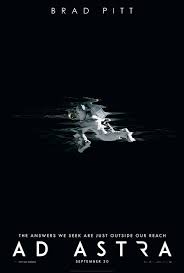 An engaging space adventure, Ad Astra explores humanistic themes in the midst of a fairly stable future. Director James Gray has compiled an impressive filmography. From historical films (The Immigrant and The Lost City of Z) to intelligent character studies (Two Lovers and We Own the Night) he's one of the more consistent filmmakers of the past two decades. His first venture into Sci-Fi for the most delivers, avoiding pretension in a realistic vision of space travel. Brad Pitt proves a steady presence as astronaut Roy McBride in search of his father Clifford played by Tommy Lee Jones.

In a decade of ambitious movies set in space there's been a new emphasis on the realities of space travel. From the space survival story in Alfonso Cuaron's Gravity and the pro-science swagger of The Martian, to the emo/trippy Sci-Fi of Interstellar, all these films are exploring the notion of humans surviving in space. French filmmaker Claire Denis offered a grittier, bleaker vision of space travel in High Life is an outlier to the recent trend. Ad Astra utilizes elements from all these films. There's also the unavoidable influence of Kubrick's 2001: A Space Odyssey.

The future in Ad Astra depicts burgeoning colonies on the Moon and Mars. One sequence features chain restaurants on the Moon - looking like any bland airport. Various corporations have carved out spheres of influence on the Moon in a repeat of the wild west, resulting in a buggy chase that's highlighted in the trailer. People are still greedy, still killing each other over resources.

The primary plot device deals with power surges disrupting the electric grid on earth. Emanating from the far reaches of the solar system, the destructive power surges are connected to a mission commanded by Roy's father which embarked on a failed mission to make contact with intelligent life. Roy is drafted (against his will) to discover the the mystery of the mission to save the Earth.

Roy's journey takes him to Mars and beyond. Alternating between action sequences and quiet meditations on loneliness, at just under two hours the film is well paced. Once Roy reaches his destination the big reveal may disappoint some. Gray is more interested in the human condition whether it's immigrants in 20th Century America or Victorian explorers in Africa. Kubrick viewed human exploration as moving towards a destiny, while Gray's more grounded view of space exploration is more concerned with its effect on the human heart.

As a study of masculinity, women are on the periphery on the story. Roy resents Clifford for abandoning him and his Mom when he was a child. Without children, Roy wants to avoid the mistakes of his father, not wanting to abandon his loved ones in pursuit of some lofty idea. Reconciliation is not the point here - it's catharsis. Not too far from his role as the stern father in Tree of Life, Pitt's quiet performance emotes a perseverance and burgeoning empathy.

Technically, Ad Astra avoids showy special effects in favor of realistic ones. Space travel is free of the comforts in 2001 and utopia of Star Trek. A claustrophobic depiction of space travel, but still full of cosmic wonder.