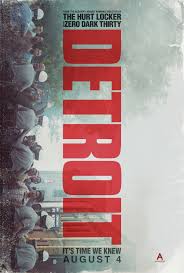 Detroit begins with an innovative animated sequence explaining the historical context of the 1967 uprising. Detroit, the center of the American Auto industry, offered thousands of jobs to African-Americans migrating from the South, but they were also relegated to a few neighborhoods and were under constant surveillance. By 1967, tensions reached the tipping point between residents and the police.


The film follows many characters over the course of a few days. John Boyega portrays a security guard who gets ensnared in a horrible situation. Other characters include members of The Dramatics, a Motown group, a Vietnam veteran played by Anthony Mackie, and Will Poulter as a racist cop.

A large portion of the film recreates The Algiers Motel Incident. On July 25-26, 1967 members of the Detroit Police Department and the Michigan National guard terrorized guests at a motel after someone reportedly fired a gun from a window. Three civilians, all African-American, were killed, while all nine hostages were physically and mentally brutalized. In 1968 the New Yorker writer John Hersey published a book after interviewing the participants.

Released a few weeks before the deadly hate rally at Charlottesville, Detroit hit an especially raw nerve during its initial theater run. Sequences play out in the film that could easily happen today when those on the side of hate are emboldened. Historical films fade in and out of relevance, but few have nailed the fear and anxiety of the current moment more than Detroit.

Kathryn Bigelow's previous two films, The Hurt Locker and Zero Dark Thirty, established her as a leading voice in American cinema. Bigelow's foray into the 1960s features her signature stylized, fast pace style. There's a smooth velocity to her films, fast moving but never over the top. Detroit moves along well enough, but does sputter in the last act.

The disappointment of Detroit is that we never get the complex tapestry of the city at that particular point in history. There's a brief scene with Congressman John Conyers, but for the most part little is explored on how and why the city reacted the way it did. Bigelow and screenwriter Mark Boal present us with a wrenching study of man's inhumanity to man. The effect is hollow and saddening.

The last 50 minutes are an elliptical procedural, a Law & Order episode on speed. There's little said on the aftermath of 1967 and how it effected the future of Detroit and its people. A lack of a protagonist also works to the film's detriment. Boyega isn't given enough to do that leaves a lasting impression. Algee Smith gives a sincere performance as as Dramatics performer Larry Reed also gets short thrift in the script. Unfortunately, the standout performances are from the most vile characters, especially Poulter.

Detroit is a flawed film, but one that may open the way for a more sobering approach to America's history.  Bigelow depicts the Civil Rights era without the triumphalism that's problematic in films like The Help and Selma, films that can leave the impression that racism and discrimination are relics from a past era. Detroit breaks from the rest in that sense. I left the film uneasy, overwhelmed, and uncertain.