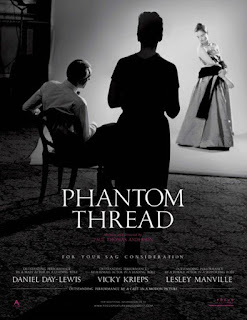 Paul Thomas Anderson's latest Phantom Thread presents a claustrophobic world of locked doors and secret rooms. In what Daniel Day Lewis has announced to be his final performance, he plays a fashion designer Reynolds Woodcock in 1950s England who finds his routine life upset after he meets a young waitress. Period detail and precision match Kubrick's Barry Lyndon in terms of accuracy and style. Phantom Thread is also an entertaining movie full of sly humor enclosed in a dreamy cinematic spaces.

Woodcock is the toast of the town; the man who royals and elites seek out to keep them stylish and regal. He lives with his sister and is a "confirmed bachelor." Reynolds surrounds himself with women who serve as muses and lovers and carelessly casts them out when he grows tired of them. Prone to ill health after the busy spring and fall seasons, he retreats to his country cottage to recover his creativity. On one of these excursions he becomes intrigued with a gawky waitress Alma (Vicky Krieps). After charming him, Alma becomes Reynold's newest confidante as he introduces her to the best of London society, a real Cinderella story.

As their relationship deepens, Reynold's insecurities emerge in their power struggle. Here the film begins to cook, going off into some unexpected places. Thomas creates such an interior world of beauty and obsession, it's hard not to get caught up in the spell of everything. Gothic themes enter into the story that becomes a tale of manipulation and heightened emotion.

Phantom Thread appears to be a change of pace for Paul Thomas Anderson, a fever dream of a movie, immersing the audience in an interior world tinged with hints of madness.