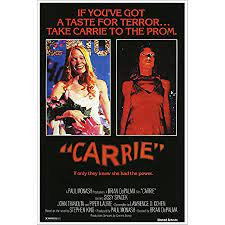 In one of the best Stephen King adaptations, Carrie remains one of the great horror films for its stylistic flourishes. Brian De Palma turned the High School experience into a bloody horror show, taking one of its most sacred institutions of the Prom and turning it into a hellscape of fire and revenge. There are dual hells existing in the film: living with an abusive parent and High School itself.

De Palma builds upon the work of Hitchcock by taking it up the 11th decibel.  I cannot imagine Hitchcock making a film about High School!  Like the King novel, De Palma is unswerving in his realistic depiction of High School and its insipid social structure. The contrast between the novel and movie are fascinating, both masterful in different ways.

Carrie is a triumph of casting as well.  Sissy Spacek is brilliant as iconic Carrie, tapping into the vulnerability, rage, and gentleness as the misfit daughter of a religious nutcase who endures constant bullying. Yet as her unlikely suitor Tommy realizes, when outside of her shell, Carrie White a beautiful person full of hopes and dreams. Every minor character works, Piper Laurie is unforgettable as Mrs. White, a terrifying character who actually exists in every American community.  John Travolta in an early role as the brute Billy Nolan makes a repulsive villain and Nancy Allen equally duplicitous as the ultimate mean girl.

The early sequence in the women's locker room surely appealed to De Palma, an edgy scene blending sexuality, horror, cruelty, and reality.  Humiliated after having her first period, the scene promptly tells us the film will be disorienting. All the eccentric angles and split diopters distort perception and open the doors of surrealism.
A heightened reality on all levels with a noticeably older cast playing High School students from the Gothic nightmare of the White household. The nightmare prom remains potent, booth cathartic and terrifying. The final scene now looks a bit cheesy since it was ripped off so many times, still great within the context of the film.

Posted by Eric Gilliland at 4:14 PM