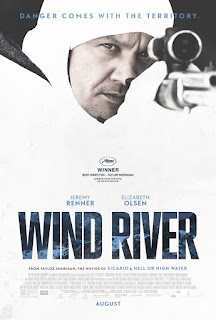 In the wintry and violent 2017 Western Wind River, Graham Greene plays a seasoned police chief who warns the young FBI agent Jane played by Elizabeth Olson, "This isn't the land of waiting for back up. This is the land of you're on your own."

Wind River refers to the Native American Reservation in Wyoming where the movie takes place. Jeremy Renner stars as Cory, a Wildlife Field officer who discovers the body of a young woman when out tracking one day. The FBI is called in to investigate the murder; they send Jane who is inexperienced, but determined to pursue the case. She enlists the help of Cory in her investigation. They have their work cut out for them.

Renner anchors the film as a character trying to come to terms with a tragedy from his own past. Life on the reservation is portrayed as tough, a place forgotten by 21st Century America. Inspired by true events, the oil boom of the past decade led to increased crime on reservations, criminal activity that typically targeted young girls. The law is designed so it's next to impossible to prosecute someone who does not reside at the reservation, leaving most of the missing person cases unsolved.

At 110 minutes Wind River moves along fast, feeling more like a 90 minute film. The acting and the dialogue are simple and to the point. A shootout scene begins without warning and devolves into brutal violence, one of the most striking sequences I've seen in a recent film. The main character is the land itself, all shot with a haunting beauty.

Taylor Sheridan has made another classic America film with Wind River, coming off of last year's socially relevant Hell or High Water. Both films do a great job of establishing setting, while creating characters that are believable and memorable.

Posted by Eric Gilliland at 4:40 PM