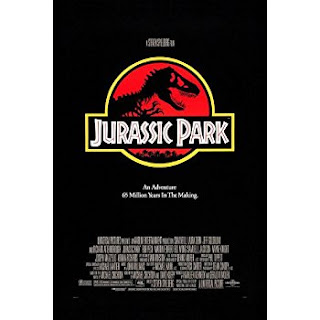 Steven Spielberg's 1993 blockbuster Jurassic Park brought dinosaurs to the big screen. Almost 25 years later the effects still work and its status as an iconic blockbuster remains undisputed.  Although it lacks the cinematic virtuosity of Jaws, Close Encounters, or Raiders of the Lost Ark, Jurassic Park succeeds as an amusement park ride movie - a formula Spielberg  crafted to near perfection.

The opening scene imitates Jaws.  A group of native workers are handling a dangerous animal that's out of sight. Someone makes a mistake and workers gets killed by the predator as head of park security Robert Muldoon (Bob Peck) looks on, a low rent Quint. The two protagonists Alan Grant (Sam Neill) and Ellie Sattler (Laura Dern), both paleontologists, are recruited by the Walt Disney (Steven Spielberg?) like visionary John Hammond (Richard Attenborough) to inspect the park.  Neil and Dern are pleasant enough screen presences, bringing life to a CGI driven venture.

Once they arrive at the park, set to classic b-movie John Williams music, we meet Dr. Ian Malcolm (Jeff Goldblum), a mathematician skeptical about genetic engineering for profit.  Goldblum makes the movie, contributing humanity and reason.

The exposition scenes are my favorite because they most closely resembled the Michael Crichton novel. Scientists extracted dinosaur DNA from mosquitos and use it to clone dinosaurs. They cut corners and assumed they could control an ecosystem, not considering the consequences of bringing together two species separated by millions of years of evolution. In the best scene, the closest to USS Indianapolis moment from Jaws, Dr. Malcolm explains chaos theory.

Inevitably, things go wrong and the dinosaurs attack.  The most harrowing sequence of a T-Rex terrorizing two kids who are there to visit their Grandpa.  From then on Jurassic Park is an adventure story, some characters become dino snacks; some make harrowing escapes.

But its unfair to compare Jurassic Park to Spielberg's earlier triumphs. By 1993 he had yet to score a Box Office Smash since the early 1980s (outside of the Indiana Jones movies). So he had to adjust his style for a new decade.  George Lucas played a significant role in post-production and his signatures are present: faster paced action, thinner characters, and awe inspiring effects created by his company Industrial Light & Magic.

Compared with the tent pole movies of this summer, Jurassic Park has aged well. Spielberg took notes from adventure films of the past, duplicating the magic of Ray Harryhausen's special effects extravaganzas.  And it's a perfect introductory film for anyone interested in the Sci-Fi genre.

Posted by Eric Gilliland at 3:34 PM