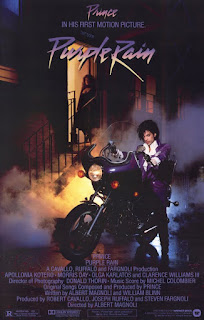 Purple Rain is many things: a complicated melodrama, a collection of some awesome live music performances, and a semi-documentary/rock video on the 80s rock scene. All culminates to a transcendent moment.

Many theaters are playing Purple Rain this week and if you are a Prince fan or even know little about him - do yourself a favor and see it!

For "The Kid" is in the battle of his life with rival band The Time. The film opens with Prince performing "Let's Go Crazy" set to a rapid montage of the First Avenue Night Club in Minneapolis.

Prince's performance is enigmatic. He's no saint and is often cruel to people.  He can also be generous.  The Kid's got some issues and is trying to work through them.

The music of Prince and the Revolution blended rock and roll, funk, blues, electronic technology, dance, and performance art. Their rivals, The Time, are more of a funk/R&B ensemble.  Morris Day, leader of The Time, proves a worthy foil for Prince, more earthy and grounded. Day provides some much needed comic relief.

Everything builds to a climatic final concert. The showstopping performance of "Purple Rain" stands as a signature moment of 80s cinema.

Purple Rain launched Prince into the stratosphere of super stardom in the 80s, joining the elite company of Michael Jackson and Bruce Springsteen.

It's hard to lose a great artist who contributed so much to the world and brought joy and meaning to many people's lives.  And yet as a culture, creators are considered outsiders, pipe dreamers, strange, bad influences, mere tools to make other people money, even worse.  Purple Rain, above all, speaks to the power of music to bring out the best sides of everybody, everywhere.

Posted by Eric Gilliland at 5:34 PM