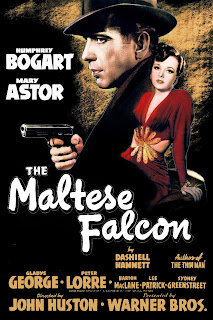 I've always admired The Maltese Falcon and yet I find it oddly elusive.  A great film for sure, but what exactly makes it great?

Sam Spade and Charles Foster Kane are flip sides of the American character. Kane's all bluster and wit, a hollow man impossible to like. Spade despises such people, he's a cynic, all too knowing observer of human nature.  He's got a chip on his shoulder.  Spade could care less if you like him, he comes from a cold world.

The Maltese Falcon, set in the urban jungle of San Francisco, a mid 20th Century Megalopolis with stone buildings and bridges, swanky hotels and apartments, wide streets bulging with automobiles, stark offices where history moves on.  The verisimilitude verges on Sci-Fi; Bogart's detachment borders upon alien.

The supporting characters are a panorama of slightly askew humanity: Mary Astor's "school girl" take on the femme fatale, Peter Lorre as the shifty Joel Cairo, Sydney Greenstreet stands out in particular with his continental charm as a contrast Spade's hard edged philosophy, and who can forget Elisha Cook Jr. as Wilmer, the most ineffectual toady in movie history (if you want to be impressed look at Cook's filmography on IMDB he acted steadily from the 30s to the 80s.)

Speaking of longevity, The Maltese Falcon marked the directorial review of John Huston, the first of 47 he went on to direct.  Few American filmmakers excelled more at adapting classic literature. Some of favorites include the underrated The Red Badge of Courage, Under the Volcano, and his elegiac final film The Dead.

Humphrey Bogart created a new type of male protagonist; a world weary cynic. In Casablanca, Bogart plays a Romantic disguised as a Cynic. There's no sentimentality to Sam Spade, you must accept him at face value.

Perhaps the elusive nature of The Maltese Falcon lies in the convoluted plot. Most of the important action takes place off camera. The plot itself, intrigue surrounding a priceless historical artifact, spirals into something close to incoherence.  But the plot is the least important element of the film.  What we see happening on the screen is just as compelling as what happens off it.  Even though the film states they were arrested, due to Hollywood code regarding morality, I'd like to think they are all still out there in pursuit of the object "dreams are made of."

Posted by Eric Gilliland at 4:30 PM