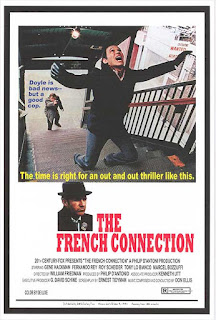 The French Connection depicts a brutal world of quicksand morality and reckless gamesmanship.  For the two protagonists in the film, Gene Hackman and Fernando Ray are mirror opposites of each other in every way except one - both view life as a game, an existential journey with no destination save enforcing their will upon the world.

Based on a true story and set in 1970s New York, director William Friedkin emulated documentary film making style and achieved a gritty realism.  The wintry urban decay verisimilitude proved highly influential in the 70s and beyond.

Hackman earned the Best Actor Oscar for playing "Popeye" Doyle, an anti-hero who will stop at nothing to crack the case (the real life Popeye appears in the film in a significant supporting role).  Popeye's an alcoholic, taunts his suspects, harbors a blatant racism, ignores authority, and annoys everyone around in his orbit.  His level headed partner "Cloudy" (Roy Scheider) somehow tolerates him.

When Popeye and Cloudy learn a massive shipment of heroin is about to arrive in New York from France they learn of a mysterious figure referred to as "Frog" (Fernando Rey). A bourgeois Frenchman and big time dealer in drugs, Frog eludes capture at every opportunity.

Really The French Connection is nothing more than a cat and mouse game, but an endlessly compelling one. The famous chase scene between a car and an elevated train remains a jaw dropping sequence.  The final pursuit ends up in an abandoned warehouse as the film ends on deeply ambivalent note. Don Ellis's edgy jazz score sustains the tension.

Posted by Eric Gilliland at 6:48 PM