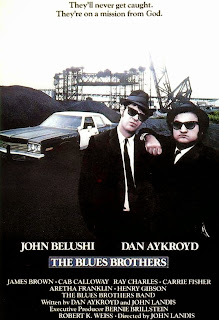 Released in the summer of 1980, The Blues Brothers brought the popular Saturday Night Live act to the big screen.  Now 35 years old, Blues Brothers perseveres not so much for its humor, but for the amazing personalities who appear onscreen.  Starring John Belushi and Dan Aykroyd as Jake and Elwood, two white blues musicians on the run from Nazis, cops, and angry girlfriends.  When the brothers learn the orphanage that guided them through childhood is about to be closed by the county they decide to embark on a "mission from God" to get the their band back together and save the orphanage.

The music performances are easily the highlights.  Director John Landis captured some legends on film including Aretha Fanklin, Ray Charles, James Brown, Cab Calloway, and John Lee Hooker. As for the Blues Brothers themselves, Belushi and Aykroyd excel in their personas and obviously had fun with them.

Going into the 1980s, John Landis seemed poised to rule the decade.  He scored four major hits in a row: Animal House (1978), The Blues Brothers (1980), An American Werewolf in London (1981), and Trading Places (1983).  Landis loved big explosions and car crashes - basically Looney Tunes on steroids.  But between the extended chase scenes you get great music and it's great to hang out with Belushi and Aykroyd.

In Belushi's all too brief film career, The Blues Brothers stands out as his best movie. Although Jake's one dimensional as a character - I could see Belushi moving him in interesting directions, a sort of rock and roll Falstaffian figure.

If you love great music, epic car crashes, a car chase through a mall, slapstick humor, the redemptive power of rock and roll - you cannot miss this one!