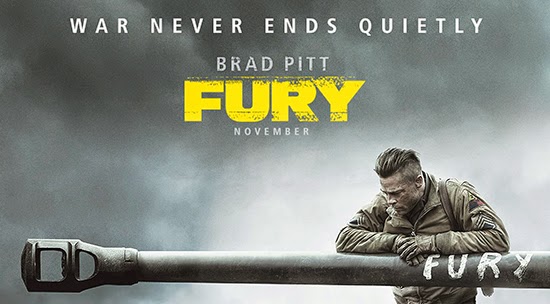 A first class combat film set in the final days of the Second World War, Fury never loses sight of the war's relentless cruelty.  Unlike other war movies there's no discussion of strategy or politics. The entire narrative is told from the foot soldiers' perspective, those who did the dirty work while others got the glory. While Fury's hardly free of war movie cliches, there's enough originality to surpass the confines of its genre.

Written and directed by David Ayer, whose films often deal with the complex psychology of masculinity and violence, examples being End of Watch (2012) and Harsh Times (2007). I detect a strong Sam Peckinpah influence in the way he challenges the audience to think about the violence they are witnessing.

Fury follows a weary tank crew commanded by Sgt. Don "Wardaddy" Collier (Brad Pitt). His men are loyal and reliable.  When an inexperienced replacement Norman (Logan Lierman) joins the unit, he must, in true Peckinpah fashion, find the killer within himself. Although crude in their manners and simple in their speech, the soldiers in the platoon are determined to do their jobs with a gritty determination and are yet capable of compassion.

Ironically, the strongest section takes a place during a lull in the fighting. After securing a German town the men enjoy a brief respite from the war.  Dyer handles a complex situation with the right amount of nuance and tension.  The men have two things on their mind: alcohol and women.  Such situations tend to place humanity itself on trial. The sequence parallels moments from war literature going back to Erich Remarque's All Quiet on the Western Front and Tim O'Brien's moving Vietnam war novel, Going After Cacciato.

The look and feel of Fury owes a debt to Spielberg's films Saving Private Ryan and Warhorse.  Unfortunately the final battle is grandiose and out of tune with the rest of the picture with an unfortunate leap into John Wayne territory.

Brad Pitt's effective in the lead and exudes a stoic weariness and a quiet strength.  Shia LeBeouf also turns in a good performance as a bible quoting GI.  Many will compare Pitt's acting to his Aldo Raines in Tarantino's Inglorious Basterds. It's like the difference between Geroge C. Scott's acting in Dr. Strangelove and Patton.

Watching Fury, I kept thinking of Inglorious Basterds since both films take very different approaches to war movies and history.  In Fury, there's no talk about the greater significance of the Second World War.  It's simply a story about a group of men in a dangerous situation. Tarantino uses history as a playground of his imagination. Ayer's films tend to slap the audience in the face with wicked doses of reality. They make for an intriguing contrast.


Fury moves along conventional tropes with a few detours into uncharted ground.  At one point Sgt. Collier states, "Ideals are peaceful. History is violent."  The simple statement offers something rare in modern movies: wisdom.