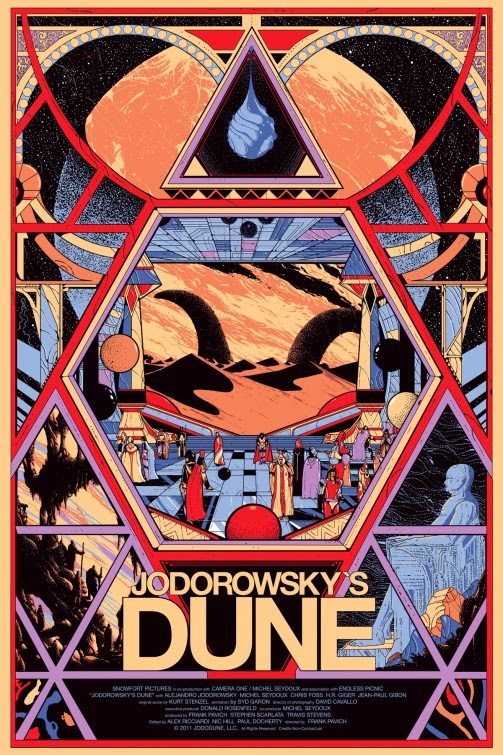 Film history is full of potentially great films that never got off the ground.  Stanley Kubrick fans can only imagine the bleak majesty of his historical epic on Napoleon.  Orson Welles had to abandon several ambitious projects, most famously an adaptation of Don Quixote. Jodorowsky's Dune, an imaginative documentary directed by Frank Pavitch, details Alejandro Jodorowsky's valiant attempt to bring Frank Herbert's novel Dune to the big screen.

I read Dune a few years ago on the recommendation of a friend.  While it's not for everyone, the novel ingeniously incorporated spiritual, historical, ecological ideas into an exciting science fiction story.  Ever since it's publication in 1965, many directors have expressed interest in an adaptation.

By the mid 1970s, Jodorowsky, a Mexican director known for making surrealistic films like El Topo, obtained the rights to adapt Dune.  The pre-production process spanned months as he assembled a group of "warriors" to bring his vision to life.  Imagine a movie with a cast featuring Orson Welles, Salvador Dali, Mick Jagger, and a Pink Floyd soundtrack. Jodorowsky, deeply enamored with the religious themes in Dune, wanted no less than to change the consciousness of young people.  In his words, "an LSD trip, without the LSD."

The documentary consists mostly of interviews with Jodorowsky and those associated with Dune.  Now 84, Jodorowsky enthusiastically recalls every detail of the project. He's a magnetic screen presence. In preparation for the shoot, he and his artists composed a 1000 page sketchbook to guide them during filming. Only two copies exist. Like a lost play from Shakespeare, it sits waiting to be discovered.

Unfortunately, the studio cut funding at the last minute.  Why? Money! What else? Unlike a writer or a painter, the filmmaker must take great risks and convince others to join them in their quest.  And you need to persuade rich people to invest large sums of money into your dream!  In a way, I cannot blame the execs.  The special effects alone presented challenges no one had ever attempted.  Jodorowsky's ego had inflated to the point of madness: he agreed to pay Dali $100,000 for every minute he worked on the set, then promised the gargantuan Welles he would hire the best chef in France to cook his meals, forced his son to spend hours learning martial arts to prepare for his role, while insisting the film run over three hours.

In the ensuing years, Jodorowsky fell into obscurity.  In 1977, Star Wars revolutionized science fiction and struck a chord with young people in a way Jodorowsky envisioned for his Dune.  Many of the visual concepts developed for Dune appeared in Alien, Blade Runner, and The Terminator. Now in 2014, he believes his long dormant project will work as animated film. Hopefully, the documentary will allow the project to finally get the green light.

Jodorowsky's an inspiring figure.  He displays no bitterness about what many would consider a catastrophic failure.  Like Leonardo Da Vinci, his ideas were way ahead of his time. Jodorowsky's Dune is much more than a footnote to Sci-Fi movie history; it has an inspiring message about the importance of having grand ambitions. Failure means nothing if you put your heart and soul into something.